Sisan was one of the truest Baha'is I have ever known, dragged into the faith by his wife. But once there he excelled at mirroring the values and beliefs we all struggle to know. His story of becoming a NSA member of the Mariana Islands is epic, whether or not true. It should be shared and written in the Annals of Baha'i history. Baha'is throughout the Pacific owes Sisan a debt of gratitude and high praise. 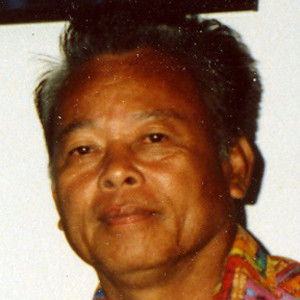 Sisan was the first person I met when I arrived on Saipan then in 1982, little did I know for much of the rest of my life he would be close to my heart.

That was the first day he fed me fermented coconut and breadfruit, beef sashimi and marinated octopus.  I think he was using the shock to prepare me for the adjustments I was to make living in the Pacific.

In that first month he guided me through a 48 hour tour of an island wake, a subtropical typhoon, pleurisy and what passed for an island hospital.  Sisan taught me to survive, to fish – the island way. We would escape our wives, sneak off to get great soba and tell tall tales.

Sisan and I also shared the background in the printer’s ink. Sisan ran the TT’s printing operations for many years. As TT’s was in the process of closing down, they were trying to force islanders to quit. The printing office was down to one staff member ‘Sisan’, and they were giving him impossible tasks.  We found connection when I showed up at the printing office (unknown to TT) to lend a hand. Sisan and I would constantly confound his supervisor by getting the jobs done, often working late into the night.

Another side of Sisan was his constant effort to become a micro businessman. Often I tried to talk him out of these enterprises, only to end up investing a little in his latest venture. Most would fail because he could never say no to his friends and family.

A funny story is when Annie and Sissi were to go to their first junior high school prom. What Sisan and Susanna cooked-up was unbelievable (to westerners).  They proposed that I would escort them the girls, barely teens to the prom (note: I was old enough to be their parent, in the mainland I would have been arrested).  I=E2=80=99m not sure why I tried to argue this was ill logical or wrong they would have none of it. The night came. The girls were beautiful in their dresses with their faces radiating such youthfulness wearing makeup and jewelry to kill for, I showed up in a suit (may be the last time I ever wore a suit on the island) and escorted them to the hotel.  I told them, once in, that I would disappear until it was time to go. I planned on cruising the outer edges of the prom checking on their status; while on many trips around the hotel I found Sisan and Susanna doing the same thing a little farther out.  I guess they were checking on me.

In some respects I lost Sisan when he moved his family in the late 80s. From then on he would be shuttling in and out of our lives on one of his many plane trips. He often said that the local airport was his home and the flights to the next port were hallway to another room of his family.

Sisan was one of the truest Bahá’ís I have ever known, dragged into the faith by his wife. But once there he excelled at mirroring the values and beliefs we all struggle to know. His story of becoming a NSA member of the Mariana Islands is epic, whether or not true. It should be shared and written in the Annals of Bahá’í history. Baha’is throughout the Pacific owes Sisan a debt of gratitude and high praise.

Sisan deserves to have a book written about him, which I’m totally incapable of. He was a friend to mankind, leader of men, of Bahá’ís and Chuukese, a philosopher, a would-be entrepreneur, a traveler, a teacher, a student of all mankind and to me most of all my friend.

Most of the world will never have known the man, but will be at a loss for Sisan represents the designation of a world citizen and a true Bahá’í who magically changed all he touched for that brief passage of time we call life.

My prayers for his family throughout the Pacific and here in the mainland. Sisan will always be remembered, as he flies through all the Abha Kingdom

Brian & Kathleen Millhoff - Pioneered to the Mariana Islands in Northern Marianas and Guam from 1982 - 2013. They loved meeting the Bahai's of Micronesia in their year of services and thank them for being permitted to share their Baha'i History and meet many of the significant leaders of Faith.