It was not customary to educate girls but her father made sure she was educated and she was a fine writer and poet. She spoke three languages: Farsi, Arabic and Turkish. Her father died when she was only eleven years old. 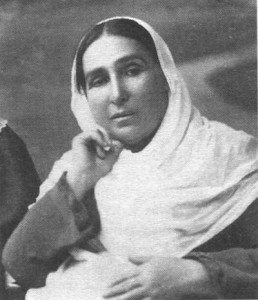 Fatimih Nahri aka Munirih Khanum was born into a distinguished family of Isfahan. Her father was a descendant of the Prophet Muhammad. Her father became a Babi (a Bahá’í) shortly after the Declaration of the Báb.

Isfahan was one of the most important Bahá’í communities in Iran. Munirih Khanum’s birth came as a surprise to her parents. It was not customary to educate girls but her father made sure she was educated and she was a fine writer and poet. She spoke three languages: Farsi, Arabic and Turkish. Her father died when she was only eleven years old. Her family arranged that she be married to Mirza Kazim. Reluctantly she agreed and they married. However, during the wedding ceremony Mirza Kazim became ill and avoided his bride and left the house that night and was found dead six months later.  Munirih Khanum vowed to never marry again.

In 1871, Ghusnu’lláhu’l-Athar and Navvab Khanum gave instructions for Munirih Khanum to be brought to Akka (Israel) where she was married to ‘Abdu’l-Bahá. She arrived in mid 1872 and later reminisced how she fell instantly in love with the young ‘Abdu’l-Bahá when they met one another. ‘Abdu’l-Bahá showed no interest of marriage until he met Munirih Khanum (24 years old). After five months they were married she was 25 years old and ‘Abdu’l-Bahá was 28. They had 9 children. Ghusnu’lláhu’l-Athar entitled Fatimih with the name Munirih which means illumined.

Munirih Khanum lived in the House of Abbud with her mother-in-law Navvab and sister-in-law Bahiyyih Khanum who became her closest friend. They lived in this home as political prisoners. The imprisonment was very difficult for Munirih Khanum. She witnessed the plots of her husband’s enemies and the death of five of her children. The death of her son, Husayn, her most beloved caused her unbearable grief and anguish. To console her Ghusnu’lláhu’l-Athar wrote a number of prayers for her to read in times of sadness.

Editor’s Note:
Ghusnu’lláhu’l-Athar is referred to the Purest Branch – Mirza Mihdi, the son of Bahá’u’lláh.

Source:
“Munirih Khanum” Session 5:  Covenant Breakers: in the East, the West, and at the World Center. bci.org