An elaborate and exhaustive interrogation was conducted in the presence of the representatives of the Persian government and others during which Fadil had the opportunity to explain the purpose of his mission and defend the Bahá'í position. The details of these interrogations were conveyed officially to Mulla Kazim and through the Persian representative reached the ears of other political figures in the country. 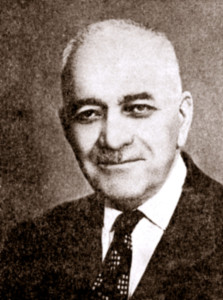 Mirza Asadu’llah Fadil, one of the prominent teachers and scholars of the Faith, was born into a noble family in Barfurush(Babul) [the city of Quddus], a city in Mazindaran, Iran.

His studies began during his early childhood at his home under the tutelage of his father. When he was in his teens he participated in the discourses given by notable scholars in his city who were the followers of Shaykh Ahmad-i-Ahsa’i. Fadil became a recognized scholar when he was only twenty years old. His assiduous study made him an authority in the current knowledge of his time, in Arabic literature, philosophy, astronomy, logic and Islamic traditions. When he was still under the care and tutelage of his teacher, a number of his fellow students chose him as their own teacher. It was at this time that Fadil became acquainted with Bahá’ís who were his father’s friends. Moreover, he had the opportunity to meet some of the survivors of Fort Tabarsi. Fadil traveled to Tihran with some of his own students in order to improve his knowledge and meet some of the outstanding scholars who lived in that city. At the same time, he himself used to teach.

In Tihran he was able to contact some of the prominent Bahá’ís. He expressed the wish to study the revealed Tablets of Bahá’u’lláh. The first of these which came to his hand was Bisharat (“The Glad Tidings”). As a result of reading this and other Tablets and Writings of Bahá’u’lláh, he became an enthusiastic Bahá’í. Thereafter he immersed himself in the ocean of the Writings and improved his knowledge of the Faith. He immediately began to teach the Faith to his fellow students in Tihran and gradually he became known in the circle of his friends as a Bahá’í. Except for a number of broad-minded friends who continued their admiration and friendship, the rest, particularly the Mullas. ostracized him.

Fadil in this period wrote a letter to ‘Abdu’l-Baha and expressed his acceptance of the Faith and beseeched the Master to advise him about his future services. ‘Abdu’l-Baha encouraged him to teach the Faith. From that moment he left everything and became one of the best known and most successful Bahá’í teachers.

Shortly after, the Master gave Fadil a mission. He was asked to travel to ‘Iraq and meet Mulla Muhammad Kazim, the head of the Shi’ah sect of Islam. The purpose of his mission was to acquaint this important Muslim personage with the Faith and assure him that Bahá’ís do not participate in political activities and are free of religious prejudices. He was to assure the Mulla that Bahá’ís are well-wishers of the world and do not wish to harm any person. The reason ‘Abdu’l-Baha wanted Fadil to seek this interview was that at that time in Persia there had been violent confrontations between those who supported the concept of a parliamentary form of government and those who supported the monarchy. In the ensuing confusion the Azalis, who were the active enemies of the Bahá’ís joined hands with fanatical elements in the country and incited the heads of both factions against the Faith. To the monarchists the Bahá’ís were accused of being in favor of constitutional government and to the constitutional faction they were accused of being supports of the monarchic regime. If the true position of the Bahá’ís were not made known to the prominent leaders, the Bahá’ís would be placed in very grave danger. Such a delicate and important mission was not carried out without considerable danger to the life of Fadil and his companion, Mirza ‘Abdu’l Husayn Ardistani.

In the first days of their arrival at Najaf which was the seat of the great Mulla both these friends were arrested, chained, imprisoned and later sent back to Persia. The letters and writings of Fadil were confiscated. However, he was able to discharge the task entrusted to him by the Master as a result of these events. An elaborate and exhaustive interrogation was conducted in the presence of the representatives of the Persian government and others during which Fadil had the opportunity to explain the purpose of his mission and defend the Bahá’í position. The details of these interrogations were conveyed officially to Mulla Kazim and through the Persian representative reached the ears of other political figures in the country.

Fadil served the Cause until his last breath, in Persia and beyond the borders of his native land. During his fifty years of service to the Faith he had the privilege of meeting ‘Abdu’l-Baha three times: on his return from Iraq and before his visit to India; when he was sent by the Master to the United States; and upon returning from his teaching trip to America.

After the ascension of ‘Abdu’l-Baha the beloved Guardian asked Fadil and his family to the Holy Land and from there go to the United States to teach the Cause. The first visit of Fadil to the United States lasted more than one year. On the second journey he spent over two years in various parts of the United States and Canada. He won many individuals to the Faith in those countries and held lectures in synagogues, churches, universities and addressed various organizations such as the Theosophists and others.

A moving appreciation of Fadil’s services abroad is found in a publication of the Bahá’ís of the United States, ‘The Bahá’í Centenary (1844-1944), a booklet describing the development of the Cause in the West:

“Undoubtedly the crowning event of the latter part of this entire period (1917-1920) was the arrival in this country of the distinguished Bahá’í teacher from Persia, a precious gift from ‘Abdu’l-Baha to the Bahá’í teaching program in America for ‘Abdu’l-Baha had said He would send us ‘a ripened soul.’ He did fulfill this promise in the person of Jinab-i-Fadil who He said had been ‘growing for a long time,’ that ‘he was wise, well informed and a thinker, a revered person, learned, sincere, humble and severed from mortal things.’

“Jinab-i-Fadil’s arrival in this country produced the greatest happiness. . . Literally volumes could be written about his brilliant services.. . He travelled from the Atlantic to the Pacific, visiting every Bahá’í Center en route and in each Center he spoke before crowded audiences in churches, colleges, organizations of every kind. Indeed he travelled a pathway of Light, the Light of the Kingdom, and there is no doubt that thousands and thousands heard the Bahá’í message proclaimed by him in a scholarly manner. He served sincerely and brilliantly, and, with wisdom, graciousness and eloquence. He proved to be indeed ‘Abdu’l-Baha’s ‘gift to America’. The story of his teaching tour when recorded in detail will form a unique chapter in the Bahá’í history of this country. . . his work was so deeply appreciated that it greatly surpassed any adequate expression of gratitude.”

Of his travels in Canada, Van den Hoonaard, writes in “The Origins of the Bahá’í Community of Canada, p. 124)” that “Jinab-i-Fadil’s visit is still the most significant Bahá’í event to have occurred in British Columbia. His lectures drew “capacity audience” (Collin 1968). On the last day, 6 February 1920, four people joined the Bahá’í faith …. 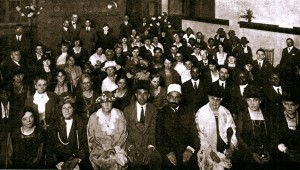 Other teaching trips were undertaken by Fadil. He spent about eleven months in India and briefer periods of time in various parts of Caucasia and Turkistan. His last years were spent in the service of the Cause in Persia. He travelled to all the important places in that country and for some years served as a member of the National Spiritual Assembly as well as of the Spiritual Assembly of Tihran. His services were greatly valued by the beloved Guardian and all those who entered his presence benefited from his vast knowledge.

The Persian section of the early Bahá’í magazine Star of the West was edited by Fadil and the portions in Persian script were written in his own hand. In addition he wrote and compiled numerous books, some of which are encyclopedic works about the Faith. Perhaps his most significant work is a compilation of Bahá’í history in nine volumes called Zuhuru’l-Haq [History of the Manifestation of Truth] which he commenced during Abdu’l-Baha’s ministry and completed in the 1950s prior to his passing. It is a unique record of the events associated with the rise and establishment of the Babi-Bahá’í community which is based almost entirely on eyewitness accounts and other solid documentations. These volumes represent the largest single writing project of the Babi and Bahá’í religions. He is also the author of many articles which have appeared in Bahá’í periodicals – some that are translated to English are listed below

In spite of his prominence and scholarship Fadil was kind and humble by nature and was loved by all who came in contact with him. On December 26, 1957, when he was going to a Bahá’í meeting he passed away of a heart attack and his seventy-seven years of service to the Cause of God were ended. A more detailed biography of Fadil is printed in the seventh volume of Masabih-i–Hidayat. (Adapted from The Bahá’í World, 1963-1968)