It was the first time in the history of the Baha'i Faith that an attack on one of its members had been dealt with justly. 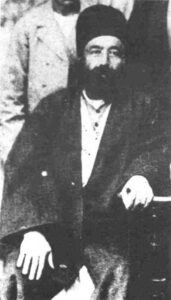 By 1889, the number of Bahá’ís in Ashkhabad was about four hundred. It was at this juncture that an important event occurred which was to be a turning-point in the history of the community. On September 8, 1889, one of the most prominent of the Bahá’ís, Haji Muhammad Rida Isfahani, was assassinated in broad daylight in the town’s bazaar. The perpetrators of this crime were a group of Shi`i Muslim who had been urged on by the `ulama. They maintained that they were entitled to do this under Islamic law. The fact that the government took no notice of this line of argument, brought the criminals to trial, and convicted them, was a shock to the Shi`i community.

The Bahá’ís were, of course, jubilant, and Bahá’u’lláh commended the action of the Russian government. It was the first time in the history of the Bahá’í Faith that an attack on one of its members had been dealt with justly. The tr 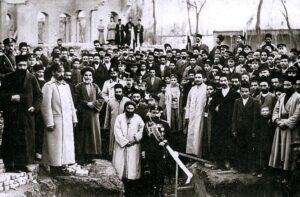 ial had one other major consequence. During the trial, the judges ordered the different religious communities to sit separately. This was the first occasion on which many who had secretly been Bahá’ís openly identified themselves. It was also the first occasion on which official recognition was given by any government body to the Bahá’í Faith as a religion independent of Islam. The Bahá’ís intervened on behalf of the two who had carried out the crime and had their death sentences commuted to life imprisonment. This action was also praised by Bahá’u’lláh.

One of the consequences of the episode of the assassination of Haji Muhammad Rida was that the Bahá’í community was forced to develop its own social institutions. As the community grew, these became more and more sophisticated.

1. A traveler’s hospice, and a dispensary and hospital were built.

3. A cemetery was also acquired.

4. On October 31, 1902, work was started on building the Mashriqu’l-Adhkar under the supervision of Haji Muhammad Taqi Afnan, Vakilu’d-Dawlih.

The foundation-stone was laid by General Subotich, the governor-general of the province, in November 1904, and the outer structure was completed by 1907, although it was 1919 before the building with its extensive external decorative work was completed. It was the most imposing building in Ashkhabad.

5. Other institutions such as a girls’ school was added in 1907

7. A Bahá’í Reading Room and Library were also added

All of these institutions were clustered around the Mashriqu’l-Adhkar in precisely the way envisaged by Bahá’u’lláh and `Abdu’l-Baha in their writings.

Images:
Baha’i World Centre Archives
The cornerstone of the Mashriqu’l-Adhkar (House of Worship) of Ishqabad was laid on 26 November, 1902: bahaihistoricalfacts.blogspot.com