Inspired by the gorgeous Luxembourg countryside, which she drove around to visit frequently, Audrey became a very prolific artist, and had numerous one-woman and multi-artist shows. She was invited to participate in a prestigious national exhibition which had a rule that only Luxembourg citizens might be awarded a prize for best artist. 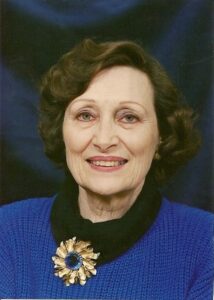 In 1937, her mother of Polish Catholic origin, met a woman in a park in Yonkers, New York, who told her about a new religion, the Bahá’í Faith, indicating that its Founder, Bahá’u’lláh, was the return of Christ. Audrey’s mother was so perturbed by this revelation that she returned home, and took refuge in a closet until her husband came from work. They discussed the Faith and its claims, and decided to attend firesides before both becoming Bahá’ís. Audrey and Janet also embraced the new Faith. Shortly after the outbreak of World War II, Frank and Veronica decided to divorce, and Audrey and Janet remained with their mother. Audrey attended Art School, and her artistic talents would be increasingly recognized, both professionally and later during her time of service at the Bahá’í World Centre.

Audrey married Dale Henderson Sr. with whom she had two sons, Dale Jr. and David, but their union did not last. Extremely unfortunate and unfair circumstances meant that she lost custody of her young boys, who she did not see again for 40 years. After her divorce she went on to marry Leslie Marcus, a devoted New York Bahá’í, and their shared desire from the beginning of their life together was to pioneer for their Faith. When their daughter Della was 3 years old they offered to serve the Bahá’í Faith internationally and were asked to move to the small European contry of Luxembourg, where they spent 14 years helping develop the early administration and trying hard to interest their fellow inhabitants in their Faith.

Inspired by the gorgeous Luxembourg countryside, which she drove around to visit frequently, Audrey became a very prolific artist, and had numerous one-woman and multi-artist shows. She was invited to participate in a prestigious national exhibition which had a rule that only Luxembourg citizens might be awarded a prize for best artist. The exhibition’s jury was so impressed with her work that they decided to create a special category to award her the recognition they felt she highly deserved. Well on her way to becoming a very successful and best-selling artist by 1975, she had to abandon her professional artistic career for other blessings.

Leslie was invited in 1975 to become the Office Manager of the Resident Engineer’s Office at the Bahá’í World Centre that was in charge of the construction of the Seat of the Universal House of Justice. They moved to the Centre of their Faith, where Audrey was asked to become Coordinator of the Audio-Visual Department. Years later she left that work to become Artist-in-Residence, and her special projects included the restoration of the paintings on the balcony of the Mansion of Bahá’u’lláh at Bahjí, as well as restoration work inside that same Mansion. To spend so much time on her own so close to the very Spot where Bahá’u’lláh lived for twelve and a half years until His death in 1892.

With heavy hearts Audrey and Leslie returned to the United States in 1996 to help care for Audrey’s elderly mother, who passed away a little over a year later at the age of 100. Leslie’s diagnosis of lung cancer and subsequent passing in April 2000 left Audrey on her own for the first time in her life. She moved west, first to New Mexico, and later to the Desert Rose Bahá’í Institute in Eloy, Arizona, where she lived happily until Alzheimer’s robbed her of her ability to care for herself. Her daughter Della, who returned to the United States from her pioneering post in Romania, moved her mother to Phoenix to be closer to her. Audrey required professional care as she became increasingly incapacitated.

She drew her last breath in the early afternoon of January 16, 2018, at the age of 95, allowing her soul to free itself from an infirm and limiting body, to join beloved relatives and friends who preceded her to the Realms on High. She will be buried on January 19, 2018 at the Desert Rose Memorial Garden.

Audrey is survived by two sons, Dale Jr. and David, who live in North Carolina and Romania, respectively, her daughter Della, her half-sisters Johanna and Nancy, three grandchildren, Christopher, Kristen, and Nicholas, two great-grandsons, Ryan and Tyler, and a great-granddaughter, Juliana. One of the greatest joys for Audrey was the fact that her son David embraced the Bahá’í Faith.

She has left behind an impressive collection of art work, including many unique paintings and drawings which she was able to produce at the Bahá’í World Centre.