Maryam was born approximately in 1826 in the village of Fuyúl in the Núr District. There is no information available about her childhood or adolescent life. She married Bahá’u’lláh’s half-brother Mirzá Ridá Quli in either 1842 or 1844, a couple of years before the Declaration of the Blessed Báb at the age of fifteen or so; which makes her about ten years younger than Bahá’u’lláh. 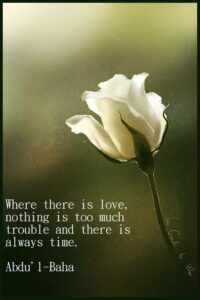 The family of Mirzá ‘Abbás known as Mirzá Buzurg, Vazir-i-Núri, Bahá’u’lláh’s father were land owners for generations in the Núr district in northern Iran. They were descendants of old Persian Sassanid Kings (224-651 AD.) The geographical location of this land made it impossible for Muslim fighters to conquer it during the invasion of ‘Arabs until the 18th century! The head of the Núri clan, ‘Aqá Rustam-i-Rúzafzún, was treacherously captured and the district was plundered by Safavid Potentates who established the Shi’a sect of Islám in Irán (1501-1736).

1834). A royal decree bestowed upon him the name Mirzá Buzurg and invested him with a robe of honor. A garment which the monarch himself had worn. The Sháh at the same time exempted the people of the village of Tákur from the payment of taxes. A few years later, Mirzá Buzurg was appointed vizier to the twelfth son of the monarch until the end of the latter’s life in 1797 AD.

Jináb-i-Maryam (as she was addressed in some Bahá’í literature), was Bahá’u’lláh’s cousin, sister-in-law, friend, and faithful follower. She was born to Malik Nisá Khánum, Mirzá Buzurg’s sister and Mirzá Karim-i-Namadsáb who was probably related to Bahá’u’lláh’s mother. Maryam had two siblings: Fátimih Khánum and Mirzá Muhammad-i-Vazir who died at a young age. For their consolation, Bahá’u’lláh revealed the tablet entitled The Exalted Letters (Hurufát-i-‘Aliyát) in his memory, for his grieving wife Havvá and her sister Maryam. This deceased cousin was “the very first among the family of Bahá’u’lláh to have been converted by Him to the Bábi Faith in the province of Núr in 1844.

Maryam was born approximately in 1826 in the village of Fuyúl in the Núr District. There is no information available about her childhood or adolescent life. She married Bahá’u’lláh’s half-brother Mirzá Ridá Quli in either 1842 or 1844, a couple of years before the Declaration of the Blessed Báb at the age of fifteen or so; which makes her about ten years younger than Bahá’u’lláh. The couple lived in Tihrán where Mirzá Ridá Quli had a house next to the entrance of the Masjid-i-Sháh and could practice his profession as Ḥakím (physician).  They had a daughter called Zahrá (entitled Thamarih – Fruit). They had other children but it is not clear whether those children were from Maryam or from Mirzá Ridá-Quli’s second wife.

There is no indication anywhere of her formal education, but since she was obviously literate, it can be presumed that she received some sort of home-schooling. Regardless of the type of training she received, her poetry is a testimony to the fact that she was not only eloquently literate; but that she was also knowledgeable in matters of religious history, theology and classical poetry. Her poems are, however, generally written with the fire of her devotion for her Lord and with the tender eloquence of a handmaiden wholly enthralled with the love of God.

Bahá’u’lláh in a tablet indicates that as soon as Maryam heard the Call from Shiráz she became a believer.

She became a flame before the fire touched her!

The only reason we know of this remarkable woman is through the Tablets revealed in her honour (‘Alawáh-i-Maryam). What other social status did she hold than being the wife of Bahá’u’lláh’s half-brother, Mirzá Ridá-Quli who was a Haji by his pilgrimage to Mecca and a physician? What services did she render surrounded by a husband who tried his best to conceal his association with Bahá’u’lláh and sister-in-laws who were staunch supporters of Mirzá Yaḥya, who tried everything in their powers to keep her mute in praise of her Lord and to make sure that she was not to attain her heart’s desire of attaining the presence of Bahá’u’lláh after His exile from Iran.

Although a number of the family members were following ‘Azal (Mirzá Yaḥya, Bahá’u’lláh’s youngest half-brother who opposed Him) and persecuted her openly, she remained faithful to the end. Maryam’s name will be forever associated with Bahá’u’lláh’s release from Siyáh-Chál. By 1852 she and her husband were well established in Tihrán and it was in her house that Bahá’u’lláh stayed for about a month to recuperate. She served Him with exemplary devotion and consideration despite the danger she was faced with. Although family responsibilities prevented her from ever seeing Bahá’u’lláh again after His exile, He wrote to her with sincere affection, and named her The Crimson Leaf (this title was also given to Táḥirih). She was planning to visit Bahá’u’lláh in Iráq but her family confined her in the house and prevented her to do so. This fact is based on Bahá’u’lláh’s Tablet of Visitation revealed in Maryam’s honor.

Maryam died from sorrow of separation from Him during the last year of Bahá’u’lláh’s stay in Adrianople. She lived a short life of pain and agony which is mentioned profusely in beautiful Tablets revealed in her honor by the Pen of the Blessed Perfection, referring to the great bond of love and devotion between her and the Ancient Beauty. In some of those Tablets Bahá’u’lláh, affectionately denotes the month she spent nursing Him back to health – with the help of ‘Assiyih Khánum – after He was released from being imprisoned in Siyáh Chál for four months.

The introduction of her character and identity as portrayed by Bahá’u’lláh in His four Tablets addressed to her, the answers to the questions pertaining to this blessed handmaiden may only be found in these Tablets.

One of them, known as “the Tablet of Maryam”, is the one that translated in part by Shoghi Effendi and starts with:

“O Maryam! The wrongs which I suffer have blotted out the wrongs suffered by My First Name from the Tablet of Creation”.

It is written in the same poetic language as the other Tablets addressed to her and – like the others – it is clearly indicative of the most tender affection cherished by the Manifestation of God for this particular cousin and obviously a loyal friend and trusted confidant. Maryamá Isiy-i-Ján [O Maryam, the Spirit of life ascended to the domain of placelessness…] The date of the Revelation of this Tablet has not yet become clear, and therefore one cannot conclude with certainty where it was revealed; although it is alluded to the fact that all the Tablets addressed to Maryam – except the Tablet of Visitation – were revealed in Baghdád! It appears to have been revealed by Bahá’u’lláh mainly to comfort Maryam in times of adversity, perhaps soon after His settlement in Baghdád and in appreciation of her tireless efforts in nursing Him back to substantial health for Him to undertake the journey. Ḥurufát-i-‘Ali’in [Exalted letters]- Revealed by Bahá’u’lláh in eight sections in Arabic then at the request of some friends He translated it Himself into Persian. As it was already mentioned, the tablet was dedicated to the memory of Mirzá Muhammad-i-Vazir, Maryam’s brother. Mirzá Muḥammad (he died in Núr) and his wife Havvá (Bahá’u’lláh’s niece from one of His half-sisters from His mother’s side) were both devoted believers. In fact, Mirzá Muḥammad may have been the first in Bahá’u’lláh’s family who was converted by Him to the Cause of the Báb in 1844. The Tablet paints a vivid picture of the journey from pre-conception to death (or the destruction of the temporal body as the tablet explains it).

The Tablet of Visitation revealed in Akka (1868-69) after Maryam’s passing by the Pen of the Blessed Perfection can certainly serve as a comprehensive introduction to the life and character of Maryam. In the prologue to this tablet, Bahá’u’lláh states that it was revealed for one who was named Maryam, and who was ablaze with the fire of the love of her Lord before the flames even touched her. The prologue also states that should one wish to pay homage to Táḥirih, one can do so with this same Tablet.

Maryam was survived by one, sole, faithful relative, her daughter, Zahrá Khánum, who was referred to by ‘Abdu’l-Bahá as Thamarih [thamarih literally meaning fruit]. Zahrá Khánum gave birth to three children; two daughters and one son. One of the daughters passed away at an early age, and when the son passed away, the other daughter, Zibandih Khánum came to be the only surviving member of the family who remained faithful to the Cause. Due to family restriction, Zahrá Khánum was not able to go to the Holy Land to visit ‘Abdu’l-Bahá before His passing. Her daughter Zibandih Khánum however, travelled to the Holy Land and was deeply touched with the loving affections of Shoghi Effendi and the Greatest Holy Leaf who referred to her as “Dokhtar-‘Ammih” [paternal cousin]. Shoghi Effendi also referred to her as “Manṣub-i-bá Vafá” [the loyal relative] and a “reminder of Ḥaḍrat-i-Thamarih”.

Editor’s Note:
Maryam’s father was from Namadsáb, so her maiden was Namadsáb. Her married name was Nuri. It’s important to remind you that in Iran identification cards, birth certificate registry’s did not exist, as a result, some birth dates or given names were recorded in the back of the Qur’án and in accordance with the Hijir calendar.